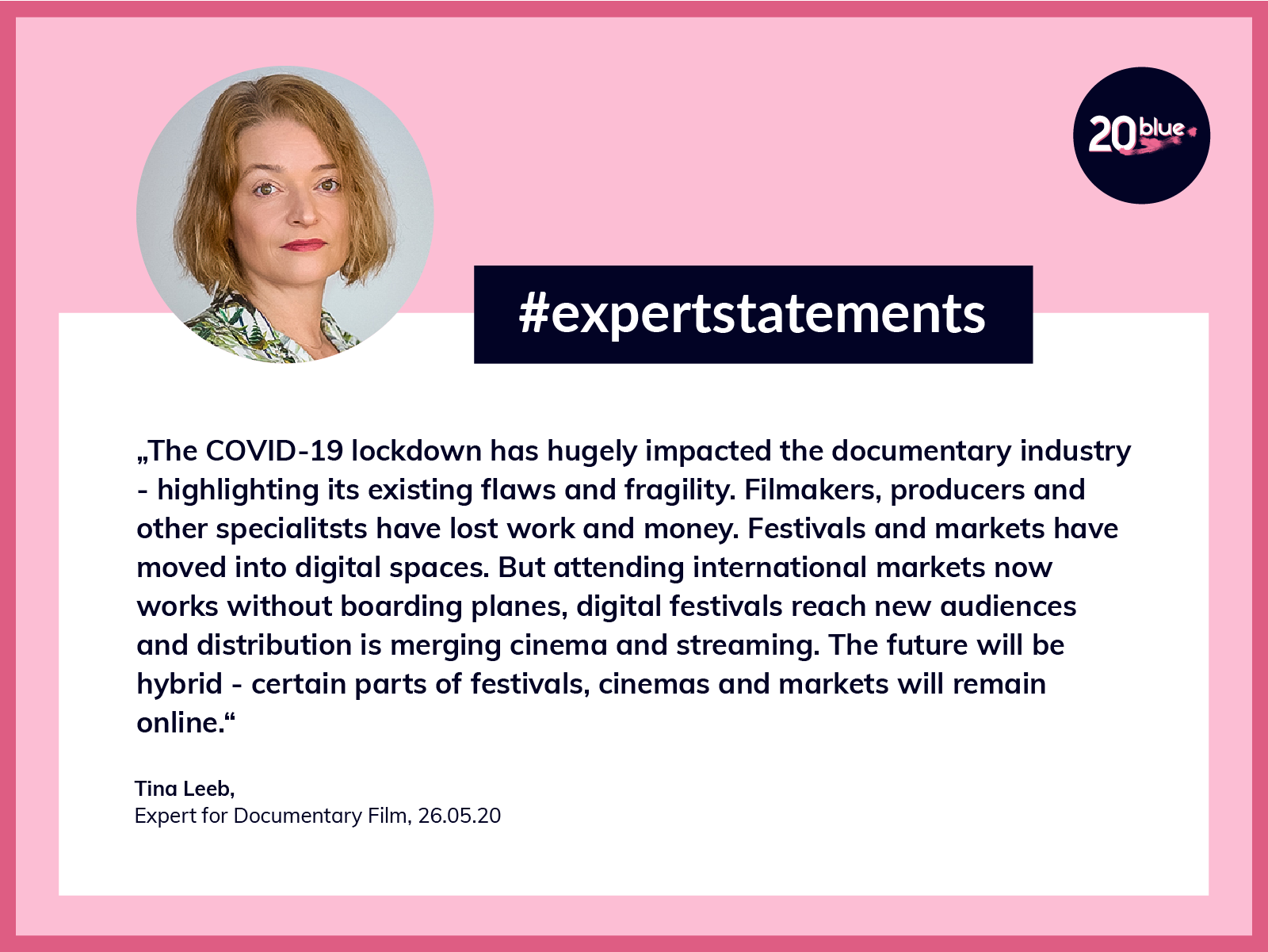 How does COVID-19 affect the documentary film industry?

The Covid-19 lockdown has hugely impacted the fragile documentary industry since documentaries are developed, produced and financed internationally. Disruption is everywhere: markets, forums, training programs, working times, schedules, delays, communication tools. Already in February first travels for foreign shoots became impossible, since then productions have been stopped or cancelled, cinemas closed, festivals and markets cancelled or transferred into digital formats with filmmakers, producers, suppliers and distributors busy organizing survival. Streaming platform usage has massively increased. Nevertheless, the crisis is not a new one, but rather highlights the weaknesses of the documentary film industry that have been prevalent for years: Remuneration for authors and directors is continually sinking, budgets are shrinking or, in the best case stagnating, all positions of a production budget need to be exhausted, margins are narrow, often too narrow for savings and reserves for contingencies - many companies and freelancers are basically constantly working at the limit. And, competition is high. International festivals compete for premiers and promising new projects at their coproduction markets. Perceived in this light, every crisis is a crisis.

Competition starts with the selection of ideas and concepts, which are trimmed for marketability in international workshops and training programs, to pitches, in which possible international financing partners, such as broadcasters and funding partners for individual projects are to be won. At the table are funds that determine regional cultural or economic relevance as a basis for funding, broadcasters and financing partners that jump in according to programmatic criteria, and distributors and sales agents that want to select renown names and exciting topics for specific regions. Everyone needs a slice of the cake to remain part of the industry.

For filmmakers often idealism is the credo - films are realized because the „message“ is to go out to the world, not necessarily because the film will refinance itself. On the other hand, producers and exploiters, i.e. cinema distributors, international sales agents, festivals and training initiatives all need to earn money with the product „film“, despite its’ long production times, high costs and risks. COVID-19 therefore inevitably brings along a reality check…

However, the film or documentary film industry (like many other industries) is not suffering from lack of content, but rather from too many films flooding the current system and thus intensifying existing problems of underfunding and overspending, clashing funding criteria for added regional value, lack of compatibility of international financing systems, financial and culture-political gaps amongst countries, overburdening distribution systems, cinema vs streaming platforms and the often failed claim to either promote film as an economic or cultural asset.

Nevertheless, films, festivals and cinemas will continue to exist because they are a particularly contemporary, visual form of reviewing our world. Especially in times of infinite abundance of information, countless sources and media outlets worldwide and in view of fake versus true news, orientation is important. Delivered to the public, after curation, by cinemas, film festivals, TV and other distribution outlets. I believe that regarding content, nearly nothing will change. There will be as many good movies as bad movies as before. But as far as the structural side is concerned, there will be big disruption. Standstill or interruption is not something that film production can handle well. Many film projects have gone down the drain, distribution and festivals heavily impacted. Some films, cinemas, festivals and distribution models have been forced to online formats, but that’s not a final solution. At every festival, it’s basically personal exchange and creative energy that we take with us when we get in touch. If you switch to the internet, you miss out on this. In the short term, lockdowns will continue as will virtual forums as a reaction to the absence of physical forums. In the next couple of years restrictions regarding event size, format and social distancing measures will continue and impact not just the design but also the reality of physical events. In the long run, the current situation will change our industry and define our new normality. I believe that in the future we will continue to have hybrid festivals, markets, forums and screenings that will hopefully tie together the best of both worlds.